Everywhere I turn, people are coughing. Or sneezing. Or sniffling. I log onto Facebook and read update after update of someone else falling ill and seeking to vent their misery online. It’s been an epic flu season and it seems to be getting worse. I’ve managed to avoid getting sick despite the number of people who insist on coming to work when they’re unfit and that some of my family have been sick in the past couple of weeks.

My brother is convinced that this is the first signs of a zombie apocalypse (we’ve been watching a LOT of The Walking Dead).  I haven’t quite jumped on that bandwagon yet, but this year has been especially bad for those coping with the flu. According to the CDC, “22,048 flu cases from Sept. 30 through the end of 2012.  By the same time last year, only 849 flu cases had been reported nationwide. That’s 26 times more flu cases by the last week of this year than by the last week of 2011.” (Flu Season 2012-2013 By the Numbers) Boston has declared it a public health emergency and people everywhere are racing to get vaccinated.

Given my heightened awareness of the current epidemic or whatever you want to call it, I’m making an effort to boost my immunity the best way I know how: my diet. This means eating foods with loads of protein, vitamins A, C, and E. I’m also trying to get more sleep in, although eating healthily is easier for me to manage than turning in at a reasonable hour.  I understand that this isn’t a cure-all, but it doesn’t hurt to be preemptive, and at the very least, it reinforces a diet high in protein, fruit, and vegetables which is always a good thing.

So this week I’m making a soup that not only packs a hefty dose of immunity boosters, but also makes the most out of a favorite seasonal vegetable that we all know and love. What’s the soup? Curried Roasted Butternut Squash Soup, that’s what.

Ginger has a long history of being used as both an important herbal remedy and a major cooking spice in some of the world’s greatest culinary regions. Given it’s various healing properties, particularly in the areas of immunity response and stomach issues, it makes a great addition to this soup. Plus it’s got that great spicy bite!

This along with a potential for fighting cancer cells, makes ginger incredibly beneficial. The two cups of butternut squash in this recipe will also be giving you a mighty dose of Vitamin A  at 428% of your DV! Vitamin A plays a central role in the development and regulation of white blood cells. In addition to Vitamin A, you’re also getting about 40mg of Vitamin C, or 75% of your DV. Vitamin C helps protect the integrity of immune cells through its antioxidant properties.

I adapted this soup from a Cooking Light recipe for a similar soup that used shallots, but I was in more of a curry mood. The original Roasted Butternut Squash with Shallot soup is a great alternative, although I’d suggest pumping it up with some more flavor as the recipe is basic all on its own.

Here are my ingredients:

2. Place squash, onions, and ginger root on the jelly-roll pan, coat with oil, and pour the spices on  top. Spread the vegetables around on the pan until they’re coated with the oil and spices throughout.

3. Bake at 375° F for about 40 minutes, or until the vegetables are tender but not over-browned. Make sure you stir them around occasionally so that they are evenly cooked on all sides.

4. Once tender, remove the pan from the oven and allow it to cool for 10 minutes.

5. Take your blender lid and remove the center piece. Scoop the squash and onion mixture and pour it all into the blender. This amount should be enough to do in one batch. If you’re making a bigger serving, then you should do this part in two batches. Add the chicken stock. Place the lid on the blender cup and cover the hole with a dish towel to avoid any messes. 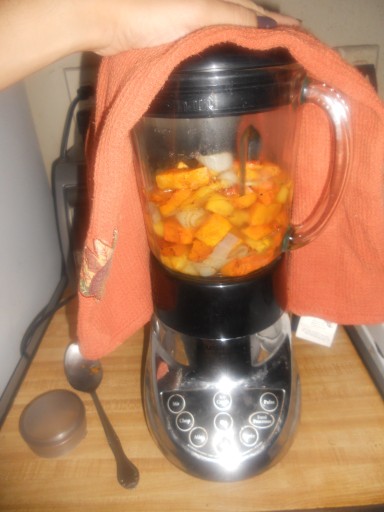 5. Blend in pulses until smooth. Keep adding stock if the mixture is too thick and stop when you’ve reached the desired consistency.

6. Pour into a medium-sized soup pot on low heat. This is where you get to check your seasonings. I played with mine for a little bit until I got the flavors I wanted. I suggest you do the same. The measurements above are just a guideline, but if you want more heat, then add more curry and maybe even some cayenne. Just a tip! 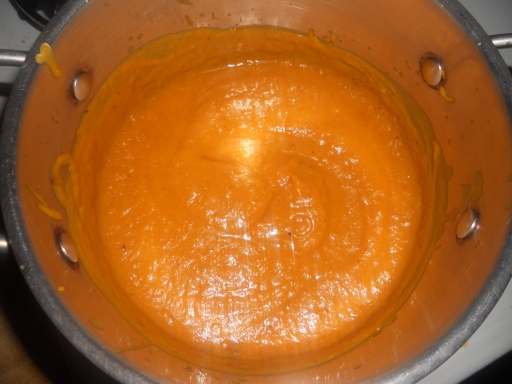 7. Cook over medium-heat for about 5-7 minutes. Pour your serving into a bowl, garnish with some cilantro and couple cracks of black pepper. Serve.

It’s warm and spicy and filling. You can easily adapt this to include other produce winners like apple and carrots. It’s also healthy, pretty cheap (less than $10!) and simple to make. Plus it’s giving you a great big push in the immunity department. Give it a try!

Are you concerned about this year’s flu season? Have you gotten sick? What are you doing to stay fit and healthy this year?