Welcome back to my very own apple week here on the blog! We’re on Day 3 and my breakfast from last night’s recipe was a great start to the day. But something was missing…..

While planning this series, I had this dream that I would spend a day demonstrating all the things you can produce from an apple. This meant taking a sack of apples and putting them through the ringer by making cider and applesauce. And then I did a bit of research on how this gets done and I had to back away with my tail between my legs. It’s not that I don’t think I can do it. Heck yeah, I can! Plus there’s a bonus of added kitchen gadgetry?!?! I’m SO there! But the reality is there just isn’t enough time to get that all done when I get home from work to then write and post this blog at a reasonable hour. So all this posturing is to say that sadly, you will not get to see me boil preserve jars and make sauce or cider from scratch. Sigh. But there is one thing I can do.  Apple Butter.

Aside from my third grade history project where I had to pretend I was an American colonial and ‘churn’ butter from real cream (which was really me just whipping heavy cream into butter with a hand mixer which incidentally, is delicious), I’ve never made a butter, jam, or preserve. Call it my epicurean bucket list. I have one. Check Pinterest.  Hearing everyone wax poetic about the wonders of apple butter and how amazing it tastes, I figured here was a perfect opportunity to create my very own spread using my favorite fruit.

Most of the apple butter recipes I found had sugar as an ingredient. Loads of it. The same goes for a lot of the butters I see on the store shelves. This of course does not jive with my efforts to keep a clean and healthy diet, so I specifically sought a recipe that either cut down the sugar drastically or removed it altogether. Then this recipe fell into my lap from the good people at Berry Ripe. I subscribe to their emails so when I saw the blown up picture of this beautiful honey-brown apple spread, I told myself that I had to try it this season.

Another reason I found this recipe so attractive was that it did not call for the apples to be peeled as some of the other recipes I found had. The skin has loads of nutritional benefits including antioxidants and most of the fiber that keeps you feeling full. Plus this cut down on my prep which was absolutely necessary since I started making this while my muffins were in the oven last night. Look at the recipe- this needs at least 12 hours of your time! Always plan ahead when you can, folks.

One last thing: this is completely gluten-free and diabetes-friendly!

After speaking with the farmers at the greenmarket yesterday, I decided to stick to a mix of locally grown varieties to create something that was not only rich in flavor but a reflection of New York apple country. These particular apples were purchased from The Orchards of Concklin in Pomona, NY. Many thanks!

Hailing from my home state, these are today’s stars:

Although these varieties have a lot in common, each of them will contribute a unique flavor and texture to this butter creating a nice balance of sweet and tart without the addition of sugar which is my goal.  Keep in mind that I’m working with what’s local here which is ALWAYS the best option with produce. If you plan on making this butter than choose varieties that are local to your region and seek it out at your nearby farmer’s market or apple orchard. The orchards closest to you will give you the best tasting apples around, so dig around a bit and do some taste tasting if you’re not sure.

Now we’re ready! I cut down on the recipe to about half with 3lbs of apples. Take a look at my pretties:

And here are the ingredients. Super simple and straightforward.

Take your apples and get to chopping. I don’t own an apple corer because I usually end up fighting with it more often than I’m removing cores. I find it easiest to just slice the apple down the middle, then cut down to the right and left of the core, leaving me with three chunks. Finally, I just cut that last slab on the end and I’m left with the core and seeds completely removed. It may not be the most economical since you’ll lose some of the flesh, but it gets the job done. 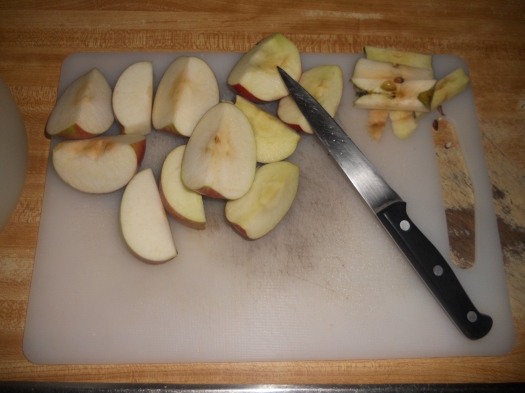 After they’re chopped in small pieces, place the apples in either a food processor blender to get it to the consistency of a sauce. Once that’s done, place the sauce in a slow cooker. Add the cinnamon, nutmeg, cloves, salt, and lemon juice and stir in. 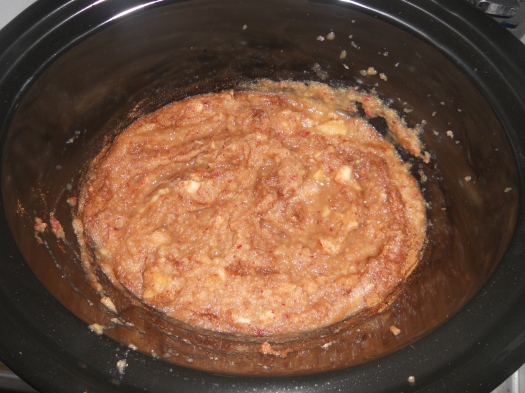 Cover with the lid, snap it in place, and leave it on high for an hour.  My ladybug timer is keeping watch here in this photo.

By the way, check out my brand new slow cooker! I’ve wanted one of these for awhile now and so I’m glad I got to break it in with this recipe. I’m looking forward to lots of slow cooker recipes this winter. 🙂

After the first hour is up, reduce the heat to low and set your timer for 12 hours. That’s right, 12 hours. I got this started right before I went to bed and checked on it in the morning before I left for work. Thankfully (and I owe him tons for this) my brother was around and able to check on it during the day, stirring it whenever I frantically texted him to make sure it wouldn’t get sticky or burn. I almost asked for him to take pictures of it on his phone and forward them to me but even I thought that was going a bit too far. I promised samples to people tomorrow and I was terrified I was going to have to deliver tasteless brown glop or just buy apple butter and pass it off as my own out of sheer embarrassment.

As kitchen helper, he did a great job of making sure my butter was absolutely right by the time I got home. I owe him lots of cookies. This was what was waiting for me.

It has that beautiful brown color and it tastes like pure apple. I will say that it was a bit more tart that I anticipated. It might have more to do with the apple selection and I wonder what the addition of Fuji or Honeycrisp would do for this butter in terms of sweetness. Nevertheless, I am now certifiable in the apple-butter-making-area and I’m pretty damn proud of it!

Since I had some leftover muffins from yesterday’s recipe, I was able to try out my still warm apple butter on something delicious. One word: incredible. Here’s another one: decadent.  I must find more things that I can spread this stuff on. It’s like nectar of the gods! Okay…I’m getting caught up here with my excitement over scratching off something from the epicurean bucket list.

I’m not Julia Child but I deeply admire her spirit and mark on the culinary world. And I thought of her as I was standing in the kitchen with my favorite apron on laughing to myself thinking about the incredible roller-coaster ride cooking can be and how much I can love the process no matter how terrifying it is. I’ll reap the rewards wherever I can get them. 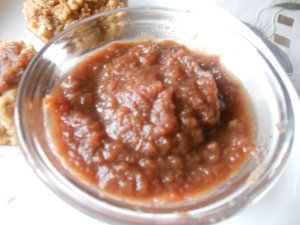 The old saying “an apple a day, keeps the doctor away” comes from am old English adage, “To eat an apple before going to bed, will make the doctor beg his bread.” I like the first one much better.

We’ve got 2 days left in this great series! Get ready for a very special edition of My Pretty Apron tomorrow. 🙂

14 Replies to “5 Shades of Apples Part III: Spread the Love”